The westernmost part of the Czech Republic and adjacent area in Germany is known for the geodynamic activity represented by earthquake swarms and large-scale degassing of CO2 fluids. The region is also characterized by numerous mineral springs, Tertiary/Quaternary volcanism and neotectonic crustal movements, located at the intersection of two major intraplate fault zones, the Eger Rift and the Marianske Lazne Fault. It is likely that all these phenomena are related to a common origin. Geodynamic activity, fluids and earthquake swarms represent a unique phenomenon worldwide. Currently, it is well accepted that many earthquake swarms are driven by fluids in the crust. However, it is still unknown how fluids are driving the persistent earthquake activity. Long-term monitoring is essential to understand these phenomena and their interactions and answer these questions.

An interdisciplinary drilling program advancing the field of interactions among earthquakes, fluids, rocks, and biosphere. A modern, comprehensive laboratory at depth will study three interconnected areas of primary research: earthquake swarms, fluid flow through the crust and mantle-derived CO2and He degassing, and the composition and processes of the deep biosphere. Specifically, such a laboratory will comprise a set of five shallow boreholes some of them with 3D seismic array. The laboratory will be established under the International Continental Drilling Program (ICDP) to have unique multi-parameter observation of earthquake swarms and related phenomena. 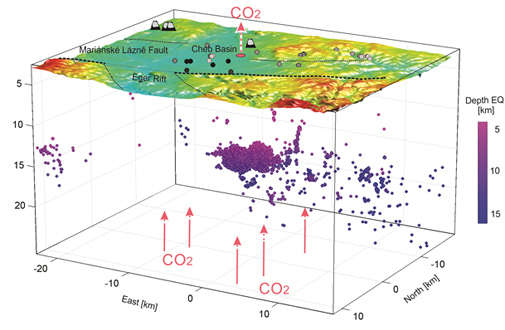 Perspective 3D view of the earthquake swarm region in West Bohemia/Vogtland. Hypocentres are indicated by filled colour circles. Topography is indicated as coloured map and ranges between 400 and 800 m. CO2 mofettes at the surface indicated, black to grey circles indicate 3He/4He ratios between 6 Ra and 0, respectively. Tectonics and known Quaternary volcanoes are indicated.